Calls for action on offensive waste left on bypass 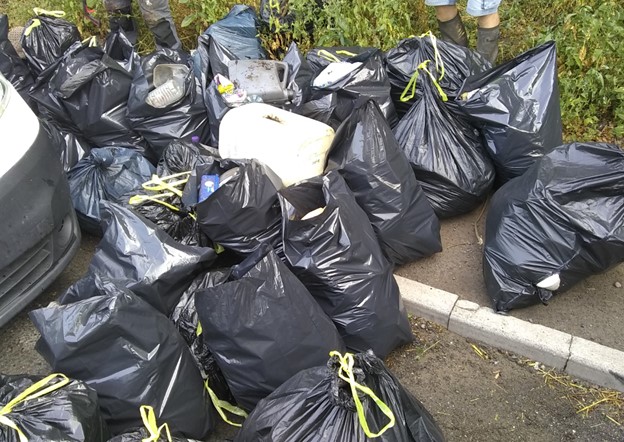 Nick Saxby, a local environmental campaigner, has written to local authorities, in a call to tackle the waste accumulating around Whitchurch’s bypass.

Nick has been volunteering with a group of activists who have been clearing up the A41 around Whitchurch.

He explains: “The project started thanks to activists in Whitchurch’s ‘Our House’ group. I was invited along to help out with the cleaning, and was shocked at how bad it was”.

“There essentially is a landfill site in orbit around Whitchurch!”.

The volunteers, calling themselves ‘The Whitchurch Ringroad Gardening Club’, have retrieved approximately 2 tonnes of waste in a stretch of the road between Tarporley Road and Belton Farm.

The volunteers have since been forced to stop their work as a result of the covid measures, but are keen to finish the final stretches when it is appropriate to do so.

Nick comments: “The bypass is a gateway into our town, and people pulling over as they pass us by might be getting a horrible impression”.

“The debris goes deep into the soil and vegetation, so it’s been accumulating for a long time. After it’s been deep cleaned, hopefully it’s an easier job to keep it tidy with surface cleaning”.

However, Nick and the volunteers are particularly upset about some of the things they’ve found.

“The most shocking thing we’ve come across, is the huge number of bottles full or urine! Appallingly, we’ve found more than one tupperware box of poo as well!”.

“It would seem that lorry drivers are using the laybys of the A41 as stopovers, and leaving both the packaging from their meals, and ultimately, the meals themselves!”.

Long haul lorry drivers leaving waste on the roadside has been covered in the news elsewhere in the country, particularly near ports.

The Whitchurch bypass forms part of routes for drivers heading North/South through the midlands, particularly for connecting to ferries across the Irish Sea.

Nick has written to Shropshire Council and is hoping to hear from the Council’s portfolio holder for highways about what actions can be taken.

“I am hoping that the Council and local community can work together on a way to improve the situation. Whitchurch deserves better than having this sort of offensive waste being left around it”.

“Of course, lorry drivers need to rest and relieve themselves, but there are rest stops not too far from the town. At the very least; perhaps drivers just need to be signposted to more appropriate places to stop”.

Nick is also working with the new ‘Restoring Shropshire’s Verges Project’ (RSVP), which hopes to increase the amount of wildflower habitats on roadsides across the county.

He says: “If we have any hope of turning roadsides into useful places for nature, getting them cleaned up is a place to start”.