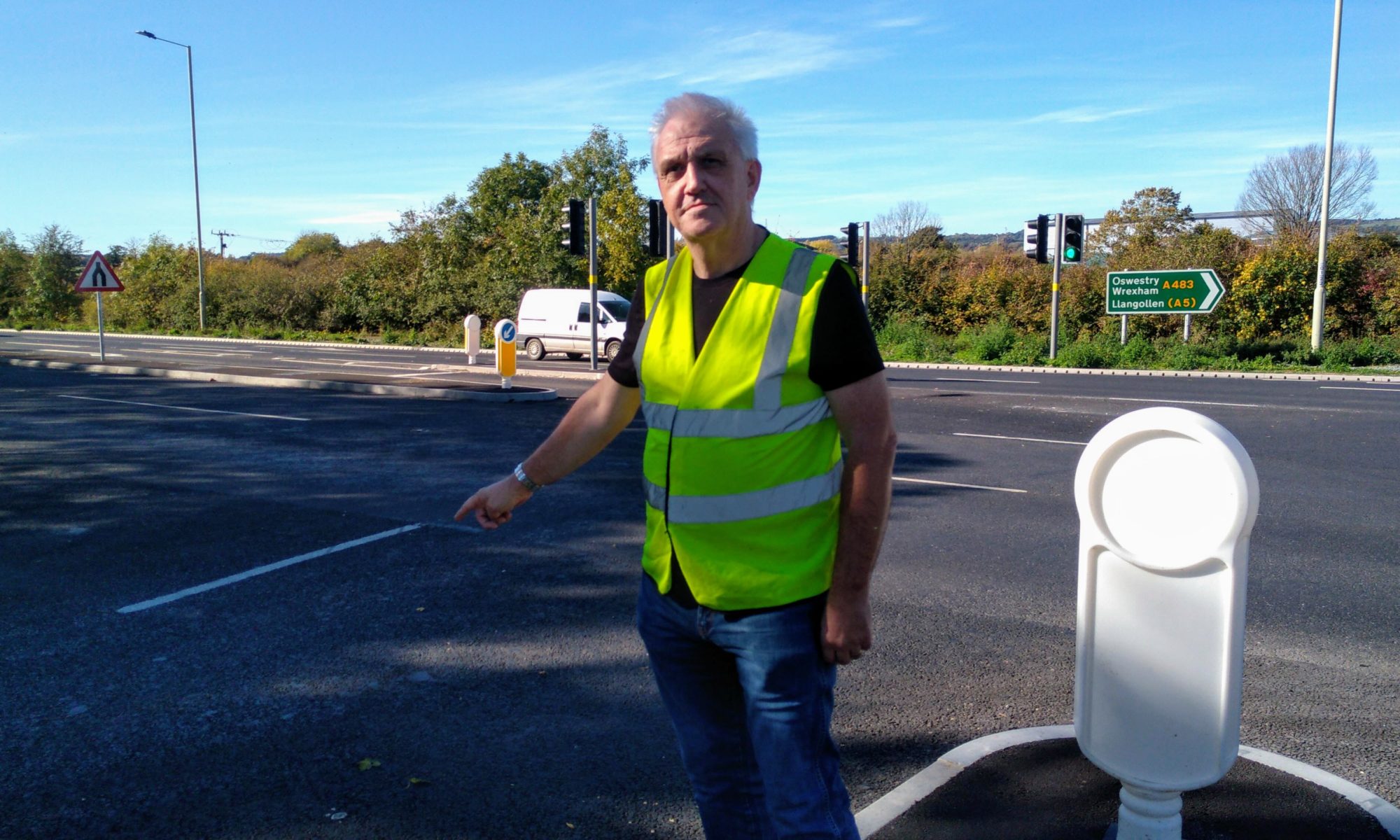 My name is Clive Geary. I am a Driving Instructor from Weston Rhyn. I believe the new Maesbury Road junction is dangerous and needs urgent action to remedy the problem. There have already been accidents, including an accident on the day the junction opened, after months of safety work. It simply isn’t good enough to hope people get used to the junction. Problems can and should have been designed out of the junction. Locals may get used to it but what about the 1,000s of vehicles that aren’t local. We should all demand better from Highways England.

Maesbury Road junction is dangerous- the lines are confusing drivers

The dividing line for the lanes has been extended out onto the A483.

Clive Geary, a Driving Instructor from Weston Rhyn and Liberal Democrat campaigner explains some of the issues with the new Maesbury Road Junction which whilst sorting some issues has created other issues that have and could lead to further accidents 1 of 2

On several occasions now, I have witnessed vehicles passing the red traffic light, going beyond the stop line and actually stopping out on the A483, in the path of oncoming traffic from the Mile End direction.

Drivers are seeing the traffic light on the far side of the A483, which repeats the traffic light that they should have stopped at. The line dividing the lanes has been extended out onto the A483 making is less clear where you need to stop. Removing those unnecessary lines would make it easier for drivers to see where they should stop when they see a red light.

On approaching the traffic lights from the Welshpool direction, the first set of lights are poorly sited. The first traffic light on the left-hand side of the road is obscured by traffic signs, this means that if a high sided vehicle is in the right-hand land a vehicle in the left lane can completely miss the first set of lights and think the next set, protecting the turn for the industrial estate are for them and therefore pass a red signal.

Clive Geary, a Driving Instructor from Weston Rhyn and Liberal Democrat campaigner explains some of the issues with the new Maesbury Road Junction which whilst sorting some issues has created other issues that have and could lead to further accidents 2 of 2 (Unsighted traffic lights)

I have already witnessed several occasions where different vehicles have passed the first red traffic lights, thinking that the next set of lights, being at green are from them and nearly hitting traffic entering the A483 coming from Maesbury.

There is also a slip road on the A483 to allow traffic coming from the Welshpool direction direct access onto the industrial estate. This slip road is not traffic light controlled. But due to the location of the 2nd set of traffic lights, vehicles are confusing a red stop signal which is not for them and stopping when they do not need to, leading to the risk of rear-end collisions. Or when they are entering the slip road, as it is not clear, they are failing to give way to traffic making a right turn onto the industrial estate from the Mile End direction.

Good design ‘designs out’ these problems

Any traffic junction should be readily and quickly understandable by motorists.

This junction was modified as the previous layout was deemed to be unsafe. The new layout is confusing and therefore is also unsafe.

The council has stated that drivers will get used to the new layout in time!

So, will the council be writing to every motorist in the UK, should they pass through or visit the Oswestry area, with a map of the new junction and instructions of what they need to do?

Surely a cheaper and safer option requiring less maintenance would have been a roundabout.

We should all demand better from Highways England. Maesbury Road junction is dangerous… fix it!

If, like Clive, you want to Demand Better from Highways England then please contact us a let us know what you think