Seven Ways The Liberal Democrats Will Fight The Climate Crisis

The UK should be leading the world in tackling the climate crisis, but the Tories are failing to address it.

As part of our ‘Plan for a Brighter Future’, we will fight the climate crisis with all the ambition and urgency required.

This is how we’ll do it:

Tackling the climate crisis will need significant structural change. We will need to change how we travel, how we build, and how we produce goods and services.

This is an achievable target; giving time for the country to mobilise and industry to adapt.

We will do this by doubling our solar and wind capacity. The Tories have banned on-shore wind, slashed support for solar power and cancelled the Green Deal. They are persistently hindering and delaying climate action.

The Liberal Democrats will invest in solar and wind technology and remove barriers for the construction of new farms. By doing this, we will double the amount of energy produced from renewable sources by 2030.

We will also invest in tidal energy, a massively underutilised energy source in the United Kingdom. We will make the UK a world leader in renewable energy sources.

🔶Invests to make all buildings greener

🌿Vote #LibDems for a #BrighterFuturehttps://t.co/I7Bgd4jS2n

We will cut emissions from buildings by adding insulation, retrofitting 26 million homes by 2030.

We will prioritise all fuel poor homes, retrofitting all of them by 2025.

Not only will this tackle the climate emergency, but it will save money for families everywhere, cutting £550 of the average energy bill.

Planting trees is one of the most viable ways of removing carbon from the atmosphere and is vital for achieving net-zero greenhouse gas emissions.

Only 1,420 hectares of trees were planted in England in the year to March 2019, 71% short of the Conservative government’s target of 5,000 hectares for the same period.

The Liberal Democrats will undertake the largest tree-planting programme in UK history.

We will build homes that are future proof. Under our plan, every home built from 2021 will have to meet strict environmental standards.

For too long, other parties have only thought about quick short-term wins. Tackling the climate crisis requires long term structural change, and the Liberal Democrats have the vision to achieve this.

6) Establish a new Department Against The Climate Crisis.

In an act of unparalleled short mindedness, the Tories shut the department tackling the climate crisis in 2016.

We will reinstate it immediately. The scale of the task in front of us is enormous. The Liberal Democrats will allocate every resource at our disposal to make sure we reach our ambitious climate targets.

We will spend and invest an extra £100 billion of public finance on climate action and environmental preservation.

Every vote for the Liberal Democrats is a vote for a Prime Minister that will deliver a bold green plan to build a brighter future. 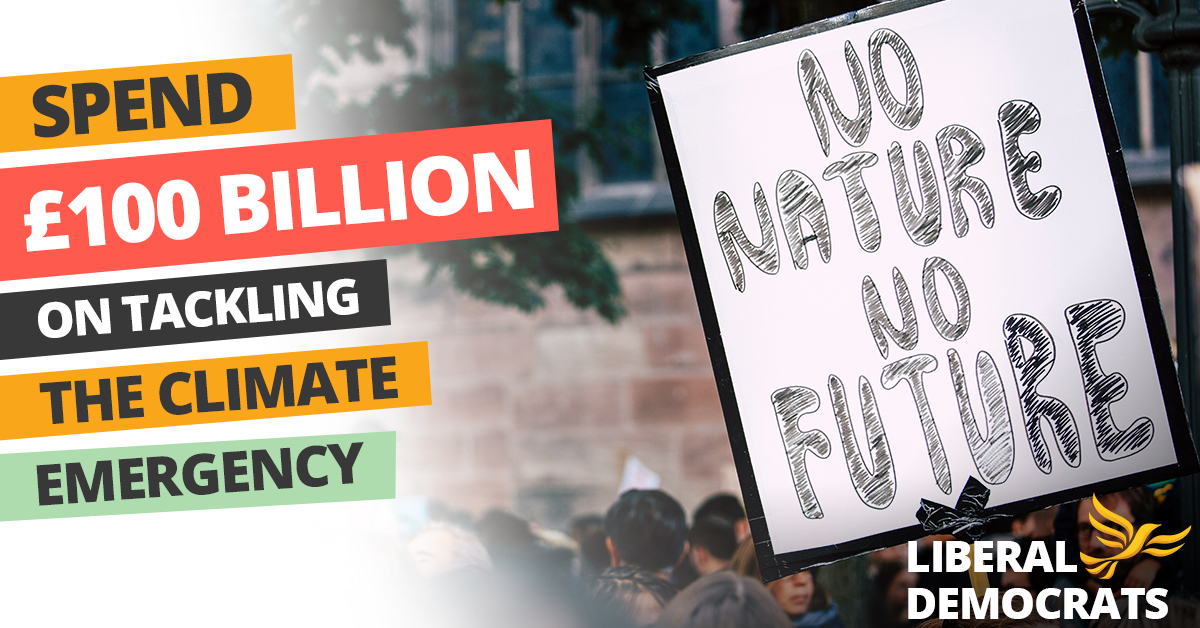