Thank you to everybody who voted for Helen Morgan on the 12th of December in the 2019 General Election.

Locally we outperformed the national result, the West Midlands regional result and the result in strongly Leave seats.  Helen’s vote went up by 4.7% – the largest increase in vote share compared to 2017 for any party in North Shropshire.  This was our biggest campaign in a long time. Whilst, the national picture wasn’t great for us – 3 weeks before polling day we were looking at a much better result and aiming to take second place – we held our own and made solid progress in target areas. Owen Paterson’s vote share rose modestly whilst Labour’s collapsed.

We have plenty to build upon as we turn our eyes to the County Elections in 2021. For those elections, the Liberal Democrats are currently the largest opposition group and we expect to make gains in North Shropshire. If you are interested in being a Councillor and standing those elections please get in touch. 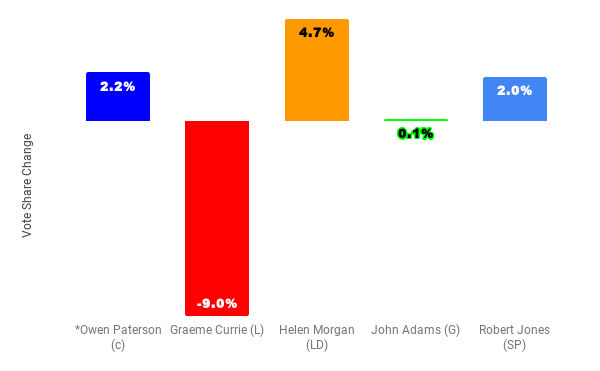 Nationally the party saw a disappointing result despite seeing a 4.2% increase in vote share and gaining an extra 1.3 million votes compared to 2017. The Conservatives gained 0.3 million votes and Labour lost 2.6 million votes. Yet in seat terms, the Liberal Democrats lost 1 seat, the Conservatives gained 47 seats and Labour lost 59 seats. Turnout was 67.3%, slightly lower than the last election in 2017. The shows clearly the distortion in seats that First Past the post produces. Under a fair voting system, the Liberal Democrats would have gained upwards of 70 seats. Just one of many reasons why the Liberal Democrats have consistently campaigned for electoral reform over the decades. https://www.libdems.org.uk/lder 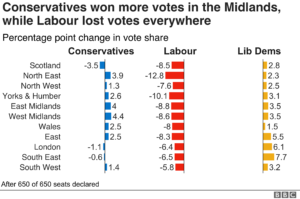 Lib Dems advanced in every region of the UK. In North Shropshire the Lib Dems grew by 4.7% – more than the national and regional amounts except for London, the South East and East. Labour went down everywhere 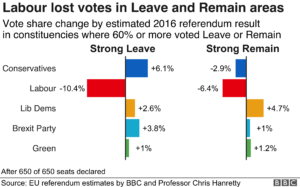 Labour lost votes in Leave & Remain areas. The Lib Dems gained in both. As a leave area North Shropshire saw and above par rise for the Lib Dems – rising 2.1% more than Leave areas