Owen Paterson’s potential 30-day suspension from Parliament is a damning indictment of Government sleaze, say the Liberal Democrats. This comes after Mr Paterson has been caught out taking money from Randox and Lynn’s Country Foods to lobby Ministers on their behalf, abusing his role as MP for North Shropshire.

In North Shropshire, the May local elections saw the Conservatives win 53.7% to the second-placed Liberal Democrats on 19.5%. Harmer Hill resident Helen Morgan stood for the Lib Dems in 2019 successfully doubling the vote and is one of the candidates who came within a handful of votes of winning this May, nearly taking The Meres – a rural Conservative heartland division. 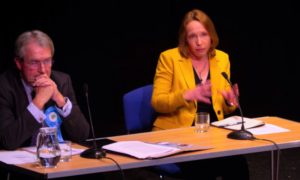 Helen Morgan (Lib Dem Spokesperson for North Shropshire) said: “My day job is in the private sector. If I was caught with my hand in the till, I would be fired, with no dispute.”

“I have debated Mr Paterson before, and even as a political adversary have had a lot of respect for the man. Sadly though, this is a really damning indictment of the sleaze his party is becoming known for, and he has let down people in North Shropshire who had put their trust in him.”

“Even in rural Conservative heartlands like where I live in Harmer Hill, people are losing trust in the Conservatives to do what’s best for their communities. From Llanymynech and Whittington in the west over to Shawbury, Wem and Whitchurch in the east, our part of the world is one where people take a lot of pride in their community. The Paterson case, I’m sad to say, will knock that pride, and is a real let-down for many.”