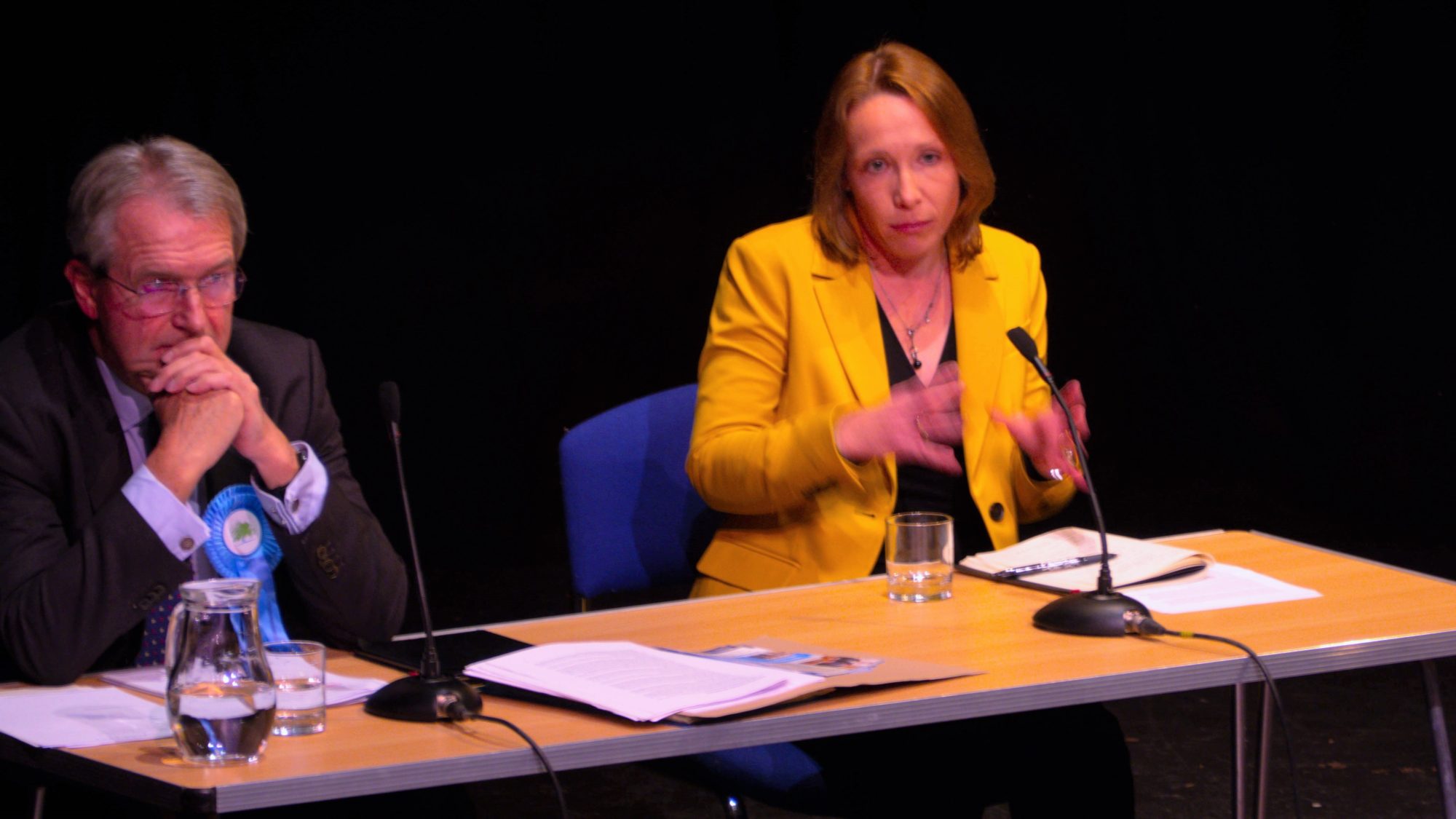 We are biased but Helen had a great husting and we have received many, many compliments on her performance. Owen didn’t have such a good time but don’t just take our word for it, here if the video of the hustings and decide for yourself:

Many, many one nation Conservatives are now backing Helen upset with how their party has now become such an extreme party. Helen represents a sane, rational, pragmatic voice for North Shropshire with the honesty, integrity and energy to build a brighter future here. 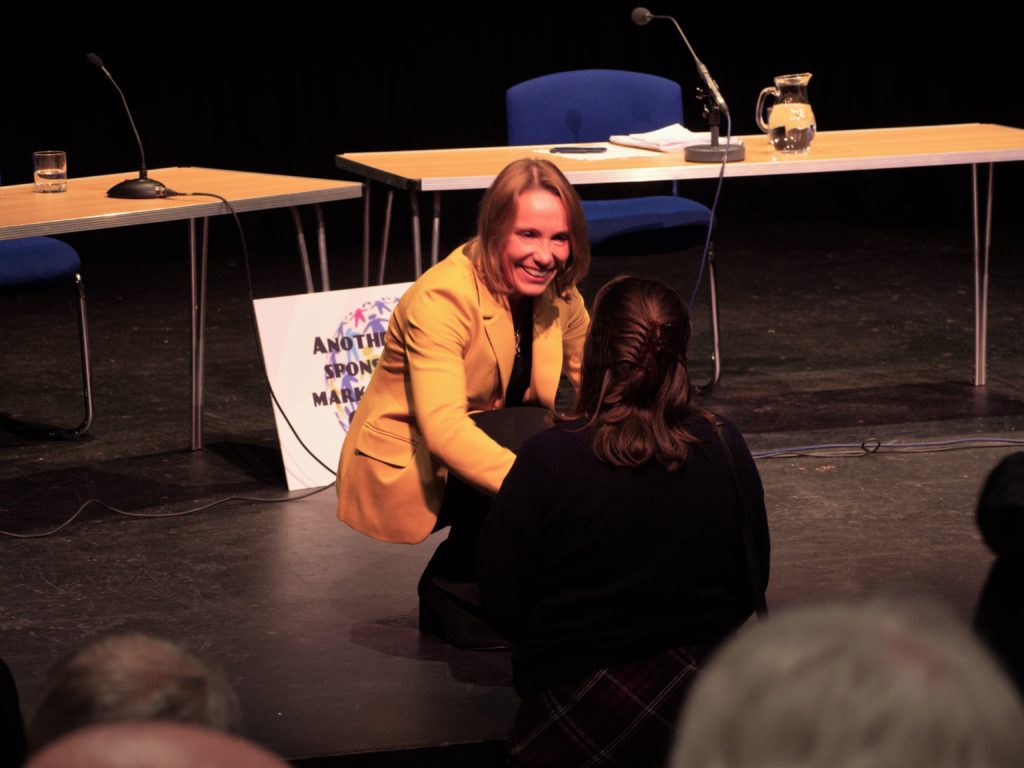 Many people have commended Helen on her first Hustings performance

Helen’s opening address to the packed room is here:

My name is Helen Morgan, and I am the Liberal Democrat candidate for our constituency.

You probably recognise Owen and Graeme, but I’m new to the fray, so firstly a little bit about me.

I’m a Chartered Accountant by profession, and I moved here with my husband a few years ago because we wanted to raise our son in Shropshire. I’m here because I’ve been galvanised to take a stand for the things I value: tolerance, honesty, common sense and democracy. We have seen the two old parties of the past being taken over by their extreme factions. The pragmatic ground of the centre has been vacated. Populism is the order of the day. But populism feeds hate and division, and it won’t solve the problems that face this country and constituency. So I’m here to offer a better alternative and a brighter future.

That’s why I’m standing as the Liberal Democrat Candidate. Here’s why I think you should you vote for me?

The first reason is stopping Brexit. The Conservatives and Labour Party are standing here offering to shake the magic money tree, but the reality is that Brexit will blow a £50bn hole in the public budget. It is simply not responsible to take a sledgehammer to the economy with one hand and borrow money willy nilly with the other to try buy off voters. We could end up spending more on interest repayments than we do on educating our children.

The Liberal Democrats will end the uncertainty that is crippling our businesses by stopping Brexit on day one, and using that £50bn we’ve saved, to invest in public services and tackle the terrible inequality in our country. If you’re wondering whether that number is pie in the sky, the Institute for Fiscal Studies has assessed it and called it modest.

The Conservative’s Brexit is so extreme, even Nigel Farage is happy with it. There’s no Brexit Party candidate here because, in effect, we already have one. The reality of Boris Johnson’s withdrawal agreement is that it really doesn’t get Brexit done. A crash out ‘no-deal’ is still on the table. If we avoid it at the end of January, we still have to negotiate a complicated trade deal, that all 27 countries left in the EU must agree to individually, within a very short – most likely impossible timescale. We could easily be threatened with crashing out this time next year.  No deal potentially involves medicine and fresh food shortages. Can you imagine living with the stress of that if your child is insulin dependent? Or your mum is fighting cancer?

As for Labour, they’re not telling us what their view on Brexit is. But it seems unlikely to me that they’ll campaign to Remain when they’ve just negotiated their own Brexit deal.

Brexit is especially important here, because we’re reliant on the farming and food industries for our jobs. For instance, a friend of mine is a farmer who breeds pedigree sheep. He is struggling to sell his sheep into Europe because of the uncertainty. He likens the stress of not-knowing what will happen, to that of the foot and mouth crisis of 2001. There are farmers all across North Shropshire in this position, and for what?

The easiest way to give our farmers and local businesses a stress-free Christmas is to stop Brexit on day 1. That’s what a Liberal Democrat government will do.

But this election isn’t only about Brexit. It’s about who will govern the United Kingdom (if there is still a UK) for the next five years. And there are other key issues that need dealing with.

I have put the NHS first on my list. Here in Shropshire we are seeing first hand the crisis that happens when you chronically underfund the NHS and starve it of workers. Our A&E waiting times are already the worst in the country.

Brexit puts the NHS at even greater risk. Donald Trump has been clear that US pharmaceutical companies want to charge far more for their drugs, and that that’s a key issue in any trade deal. The NHS is not safe if there is Brexit. You can’t trust Johnson’s claims that it’s not true, because you haven’t been able to trust many of his claims to date.

Labour want Brexit, and then a top-down re-organisation of the NHS, which would result in jobs for management consultants, but not necessarily money for the 40,000 nursing vacancies underlying this crisis. And it’s not clear how their four-day working week will help with this chronic understaffing either.

But the Liberal Democrats will stop Brexit to keep the NHS safe from a US trade deal, put 1p on income tax to give the NHS the cash injection it desperately needs. Stopping Brexit will help retain our EU nurses and doctors here while we try to fill the massive number of vacancies we have. We will build the hospitals we actually need for the future.  In the longer term we’ll iron out the gaps between the health and social care by bringing them together, which many especially older people fall through will be ironed out.

Next on the list is education. The public sector pay freeze has left teachers demoralised and the brutal cuts since 2015 have left North Shropshire schools under funded by a total of £6.7 million. We’ll reverse these cuts and recruit 20,000 more teachers to reduce class sizes and give every child the best start.

We need to look to the future as well. In places like this where many people are in low-paid jobs, the march of technology and threat of automation is real.  Just look at the most modern milking parlours, where the cow does all of the hard work itself! If we want our villages to thrive, we need people with skills for the 21st century economy. The Liberal Democrats will provide a £10,000 fund for each adult to retrain or keep their skills up to date over their lifetime.

We also need to consider other essential infrastructure for the future economy. The dreaded ‘B’ word – but this time it’s broadband. I doubt anyone sitting here will need me to tell them that the broadband here can be awful. I bear the scars of trying to connect an office near Prees to the outside world. We don’t think Labour’s plan of spending millions on nationalising the infrastructure is the answer to the question. We’ll legislate to make sure that existing providers meet their obligations to provide rural broadband, and ensure that those obligations are fit for purpose as technology develops.

We’ll also tackle the significant shortage of affordable housing here. While we were attempting to bring the 21st century to our office, I chatted with a BT engineer from Whitchurch – a highly skilled worker with a full-time job and a working wife, who can’t even begin to afford a home or save for a deposit. Our rural plan will require councils to identify the houses we actually need in each area, and the developers to build more affordable housing, so instead of building the wrong homes in the wrong places, we’ll help to ensure that our villages retain the young working families they need to thrive.

I can’t ignore the climate emergency. The Conservatives have done nothing about it. The Labour party seems distracted by a utilities renationalisation programme. The Liberal Democrats have a detailed and credible plan to become a world leader in this area, including banning fracking altogether, generating 80% of electricity from renewables by 2030 and insulating all low-income homes by 2025.

I’ve done a whistle-stop tour of our key policies, but I will stop now and leave you with some thoughts.

We have choice at this election. We can choose extremism or pragmatism. Populism or responsible government.

You could vote Conservative – the party which has completed its journey to the far-right, appeased the Brexit party, been endorsed by convicted criminal Tommy Robinson and is offering the hardest of Brexits with years and years of uncertainty to come as we wrangle over our future trading relationships.

You could vote Labour – the party which has returned to the 1970s, is being investigated by the equalities and human rights commission and will not own up to its policy on the most important issue to face this country since the war.

Or you can vote Liberal Democrat, to stop Brexit, give businesses the certainty they crave, and get a government with a detailed, pragmatic and fully costed plan to solve the severe issues we face as a country.

If you vote for me, you’re voting for all of that, plus a fresh face for North Shropshire, with the honesty, integrity and energy to build a brighter future here.